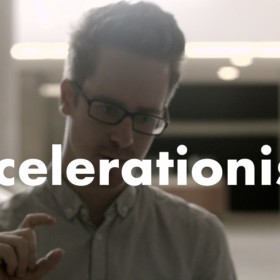 With uncertainty comes new theory. While academics are stuck in the old fashioned ways of thinking that are nowadays so typical for universities, there is a growing network of free thinkers and researchers connected to art schools trying to come up with new theory. With new ideas like accelerationism, speculative realism and neo-modernism these are exciting times for theorists.

Film maker Christopher Roth and philosopher Armen Avanessian made a film about it: HYPERSTITION. According to UWC lecturer Delphi Carstens hyperstition is “… a neologism that combines the words ‘hyper’ and ‘superstition’ to describe the action of successful ideas in the arena of culture. Akin to neo-Darwinist Richard Dawkins’ concept of memes, hyperstitions work at the deeper evolutionary level of social organisation in that they influence the course taken by cultural evolution. Unlike memes, however, hyperstitions describe a specific category of ideas. Coined by renegade academics, the Cybernetic Culture Research Unit (CCRU), hyperstition describes both the effects and the mechanisms of apocalyptic postmodern ‘phase out’ or ‘meltdown’ culture.”

Those CCRU renegade academics are, of course, Nick Land and Sadie Plant who define hyperstition as making fictional entities real. Christopher Roth’s and Armen Avanessian’s HYPERSTITION is a film about time and narrative. Speculative realism and accelerationism. Transmodernism and xeno-feminism. Of thoughts and images. On plants and the outside. Abduction and Recursion. Yoctoseconds and Platonia. Plots and anaerobic organisms. About the movement of thinking and philosophy in art, anthropology, design, economy, politics, linguistics, and mathematics. And back into abstraction.

Watch the cool trailer below. The upcoming months the film will be screened at several art academies around the world. More info: hyperstition.org.

Hyperstition Trailer What? from Christopher Roth on Vimeo.

Read more about Delphi Carstens’ idea of hyperstition at Maggie Roberts’ blog MER or watch the lecture below.